Madrid City Council expresses its condolences to the British Nation 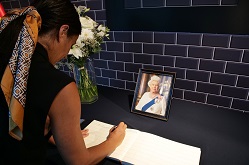 The Vice-Mayor Begoña Villacís and the Councillor for Internationalisation, Santiago Saura, have conveyed on behalf of the people of Madrid their sympathies to the British nation on the loss of Queen Elizabeth II. They both went to the UK embassy last 13 September, where they were received by the Minister Counsellor, Sarah Cowley, and signed the Book of Condolence.

In her dedication, the Vice Mayor stated that "for seven decades, Queen Elizabeth II represented the best values of the United Kingdom", highlighting her "respect for the past and tradition, but also her courage and openness to change" as well as her "exceptional personality".