Accessibility, a new meeting point between Havana and Madrid 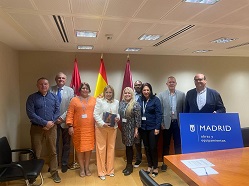 On 11 october, a delegation from the Office of the Historian of Havana visited the city of Madrid.

The aim of the meeting was to conclude the details of the prospect mission to Spain for the joint project with the AECID, Habana Inclusiva.

The technical group from Havana was accompanied by Lissette Iglesias Camejo, Head of the International Relations Department of the Office of the Historian of Havana. They were received on behalf of the Accessibility Office of the Madrid City Council by its Director General, Noelia Cuenca, accompanied by Rafael Morán, Deputy Director General, and Gerardo Santiago, Head of the Department of Studies and Planning.

On behalf of the Deputy Mayor’s Office, Mr Ricardo Iglesias, Head of the External Relations Service, was also present.