The City of Vienna visits Madrid 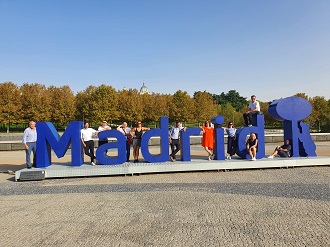 On 4 October, a delegation from Vienna, made up of senior officials of the City Council and headed by the Councillor for Innovation, Urban Planning and Mobility, Ms. Ulli Sima, visited the city to learn about the best practices of the Madrid City Council in terms of mobility and urban planning, such as Madrid 360 and Madrid Rio.

They were received by the Councillor for Internationalisation and Cooperation, Mr. Santiago Saura, who, after an institutional greeting on behalf of the Madrid municipal corporation, gave the floor to the Director General of Mobility Planning and Infrastructures, Ms. Mª Dolores Ortiz, who detailed the implementation and operation of "Madrid 360", the system of regulated access to the historic centre of the capital. The Deputy Director General for Internationalisation, Mr. Juan Carlos de Castro, was also present at the meeting.

Afterwards, the delegation went to the Mercado Municipal de la Paz to visit its facilities and learn about its operation, which was explained in detail by its director of commercial management.

The visit ended with a bicycle tour of Madrid Rio, in which the Director of Conservation of Madrid Rio, Ms. Nieves Vicente, and the Engineer of the Parque Lineal del Manzanares, Mr. Carlos Dueñas, explained their activities.

The visit was accompanied by the Head of the External Relations Service, Mr. Ricardo Iglesias, on behalf of the Deputy Mayor's Office.