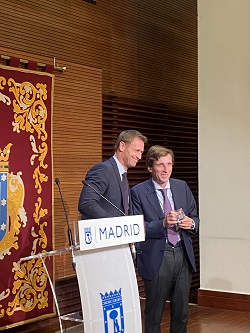 A substantial delegation of mayors and senior municipal and business officials from the Île-de-France region, led by its current president, Stéphane Beaudet, Mayor of the city of Evry-Courcouronnes, visited the city of Madrid on 19th, 20th and 21st, October.

The programme was launched by the Mayor of Madrid, José Luis Martinez-Almeida, who greeted the attendees. It included the participation of several municipal services, such as the Social Services Department, whose Director General for Equality, Ana Fernández, made a presentation about her duties. Also, managers from Madrid Río, the Matadero Cultural Centre, the Madrid Calle 30 Screen Control Centre and the Madrid Integrated Security and Emergency Centre, CISEM took place in the informative sessions.

The programme ended with the presentation of the "Madrid Nuevo Norte" project by Miguel Hernández, Director of Strategy and Corporate Development of the consortium.

The voyage was coordinated by Ricardo Iglesias, Head of the External Relations Service of the Deputy Mayor's Office.