Second visit to Madrid by the Mayor of Seoul 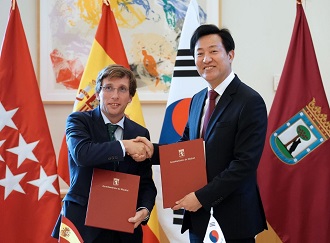 On 26 and 27 October, the Mayor of Seoul, Mr. Oh Se-hoon, visited Madrid as part of a work programme focused on the signing of the Memorandum of Understanding between the two cities.

During the first day, he got to know the first phases of the Madrid Río project, with the construction of the underground section of the M30 ring road. At the Puente de Toledo bridge, he admired the finished work. He was accompanied by the architect responsible for the design of the project, Mr. Fernando Porras; Mr Santiago Soria, Deputy Director General of Parks and Nurseries, and Mr. Héctor Barbero, engineer of Madrid Calle30. Prior to the field visit, Mayor Mr. Se-Hoon was given a presentation about the whole project at the Madrid Río Interpretation Centre.

Later that day, the signing of the Memorandum of Understanding between the city of Madrid and Seoul was held in Cibeles, by their respective Mayors, to deepen the already excellent relationship between the two cities in exchanges of economic, social, and cultural development issues. In the informal chat followed by the signing of the Memorandum, Mr. José Luis Martínez-Almeida and Mr. Oh Se-hoon agreed on the need to relaunch the direct air link between the two cities, since our capital is one of the main tourist attractions for South Korean tourists in Spain.

At the end of the visit, Mr. Oh Se-hoon called on the Mayor of Madrid to meet again on a future occasion, the next time in Seoul.

The programme ended on the morning of the 27th with a technical visit to the Storm Tank facilities, where the Mayor of Seoul could learn about the operation of this vital infrastructure in the treatment of the city’s water and its environmental balance. He was accompanied by Mr. José Antonio Martinez Paramo, General Coordinator of the Environment and Ms. Marta Lopez, Head of the Sewage Department.

The programme was prepared and coordinated by Mr. Ricardo Iglesias, Head of the External Relations Service at the Deputy Direction for International Affairs.