Madrid commemorates 75 years of relationship between Spain and Philippines 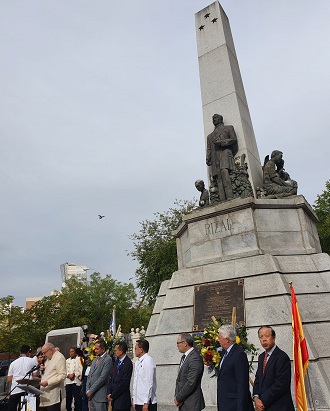 On this occasion, last Friday, October 28th a commemorative plaque was installed in the monument of José Rizal.

The event, organized by the Philippine Ambassador to Spain, Mr. Philippe J. Lhuillier, was attended by the Ambassadors of Malaysia and Vietnam. The Director General of Cooperation and Global Citizenship, Mr. Cecilio Cerdán, represented the Madrid City Council.

After the words of the Ambassador of the Philippines and the Director General of the City Council, a toast was made to the prosperity of both countries, in front of the statue of the hero of Philippine independence, José Rizal, inaugurated 26 years ago