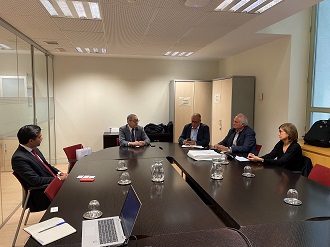 On Monday, November 14, Mr Luis Martín Bogdanovich, manager of PROLIMA, visited Madrid City Council to hold an exchange of ideas on urban projects for the city of Lima and Madrid.

PROLIMA is a decentralized body of the Municipality of Lima whose purpose is to promote the recovery of the Historic Centre of Lima, declared Cultural Heritage of the Nation in 1972 and registered on the UNESCO World Heritage List in 1991.

During the meeting, various aspects of the new urban plan for Lima, which will be developed over the coming decades, were discussed. References to the stages through which the renovation of the historic centre of Madrid has passed were made, which are still in progress. Also, the protection of the city's heritage, as well as the current centres of urban development, such as the Metropolitan Forest and Operation Madrid Nuevo Norte were mentioned in the discussion.

The meeting was scheduled and coordinated by the head of the External Relations Service of the Internationalization Area, Mr Ricardo Iglesias.