Celebration of Europe Day on 9th May 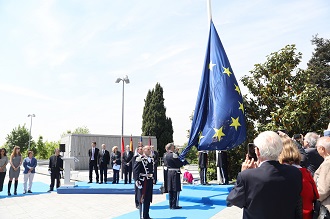 During the past 9th May, the Madrid Town Hall has organised an act for Europe Day, in which European dignitaries have participated, at the Aniceto Marinas’ slope at the San Vicente roundabout.

The encounter took place at the entrance of Madrid Río and consisted of the hoisting of the European Union flag, at the Aniceto Marinas’ slope at the San Vicente roundabout. In this event, the Madrid Mayor Manuela Carmena Castrillo, diplomatic delegations and other European dignitaries participated, such as Jochen Müeller, the representative of the European Commission in Madrid, Ivan Kondov, ambassador of the Republic of Bulgaria in Madrid and Eugenio Nasarre, the president of the Spanish Federal Council for the European Movement.

During Europe Day, Robert Schuman, one of the founding fathers of the European Union, has been remembered because of his historical declaration and the proposition to lead Europe towards a new direction. This new course was based on cooperation and political collaboration as a tool to achieve peace. In fact all the assisting and speaking dignitaries have put emphasis on it. It is not to forget that Europe has been living 70 consecutive years of peace and prosperity. The unity strength amongst the member states, along with the importance of the democratically elected European Parliament, has been underlined.

By the same token, the great challenges and difficulties faced by all Union citizens have been pointed out: the growing socio-economic gap with the consequent inequality; climate change and sustainable energy; the democratic consolidation and the rule of law, with a particular mention to the freedom of expression. This context will be defining the future of the Union. In this aspect, the citizens’ participation has a key role which has been stressed by both the president of the Spanish Federal Council of the European Movement Eugenio Nasarre and the State Secretary for the European Union Jorge Toledo Albiñana.

In her speech, the Madrid mayor has mentioned one of the founders of the League of Nations, Rafael Altamira, highlighting the need to create a society which is more European and able to materialise what Altamira aspired to in 1919: a sustainable peace. To conclude, the mayor has concluded the ceremony sending an optimistic message, deemed to as necessary in a time characterised by the lack of solidarity and the partial restauration of borders whose consequences are suffered mainly by the most vulnerable.